I am a crumble convert.

I’m used to making double-crusted pies, which involve a warm fruit filling sandwiched between two buttery crusts. Crust is my favorite part of pie, so it just makes sense.

But streusel topping is my favorite part of fruit crumbles and crisps. (Not to be confused with buckles, grunts, slumps, and other fruit desserts that sound unattractive.) 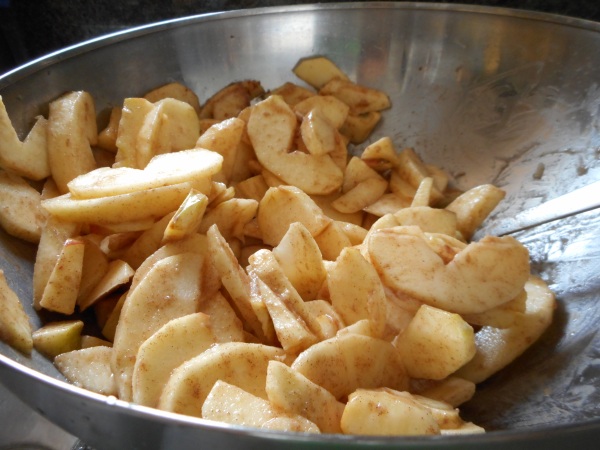 So a dessert that involved both of my favorite elements–a bottom crust and a crumbly streusel topping–just made me wonder why I hadn’t ever done it before. And now that I’ve made this apple crumble pie, I think I’ll use a crumble as the “top crust” for all the fruit pies I make in the future (I’m looking at you, blackberry). It just makes for such a fun texture, bringing a sugary crunch into the equation.

It’s also an excellent vehicle for any spices you want to add, whether to complement or reinforce the flavors in the filling. And as a bonus the crumble topping offers no resistance when you slide your fork into it for a bite of pie. By contrast, a top crust makes you apply a little more pressure. And why should we work for our dessert?

My friend Tammy suggested we use this recipe from Epicurious, and I’m glad she did. It made for an excellent introduction into the world of crumble pies.

It took a bit of arm-twisting to get me to stray from my favorite pie crust recipe, but I suppose I should give other crusts a chance. The most notable thing about the Epicurious pie crust recipe was its addition of apple cider vinegar. According to Epicurious, the vinegar makes the dough easier to roll, keeps it tender, and makes it less prone to shrinking, all while keeping it flaky.

The vinegar didn’t impact the flavor of the dough, and I’m sure the other stuff was true, but I didn’t really notice it either way. Or maybe my love for my favorite pie crust recipe just makes me blind to the merits of other crust recipes. We’re very happy together, after all.

The filling was lovely, but then again it’s hard to mess up filling. Thinly sliced apple slices, some sugar and cinnamon, a little flour or cornstarch, bake long enough that it becomes tender and syrupy, and you’re good to go. I don’t think we added the two tablespoons of melted butter in the recipe, so I’ll consider that optional.

And then there was the crumble, which, of course, was life-changing. It doesn’t make for a pretty pie (Tammy remarked that our pie resembled macaroni and cheese with a breadcrumb topping), but it makes for a delicious one. If a crumble changes your life, does it matter how it looks?

For the crust: Combine the flour, salt, and sugar in a large bowl. Add the cubes of butter and shortening, rubbing it into the flour mixture with your fingertips until they’re the size of peas. Combine the vinegar and ice water and drizzle them over the flour mixture (you may not use all of it). Stir it together until a dough forms, adding more water or flour if necessary. Roll the dough into a ball and flatten into a disk. Wrap it in plastic wrap and refrigerate it for 30 minutes.

Roll the dough out on a floured surface until it is 12″ in diameter. Transfer it into a 9″ pie dish. Trim the overhang as needed and crimp the edges according to your level of fanciness.

For the filling: Combine all the ingredients into a large bowl until the apple slices are fully coated. Put the filling mixture into the crust (it should be about 1-2 inches taller than the pie tin, as the slices will shrink in the oven).

For the crumble topping: Combine the flour, sugars, cinnamon, and salt into a medium bowl. Using your fingers, rub the butter into the flour mixture until it is fully integrated. Distribute the topping on top of the apple slices until it fully covers the apple slices.

Bake the pie on a baking sheet for about 40 minutes, or until the topping is golden (if it is browning too quickly, cover the top with foil. I didn’t need to do this at any point, but all ovens are different). Then reduce the oven temperature to 350 degrees and continue to bake the pie for about 45 additional minutes, or until the filling is thick and bubbly and the apples in the middle are tender when pierced. Let cool for as long as your patience allows and serve with vanilla ice cream.