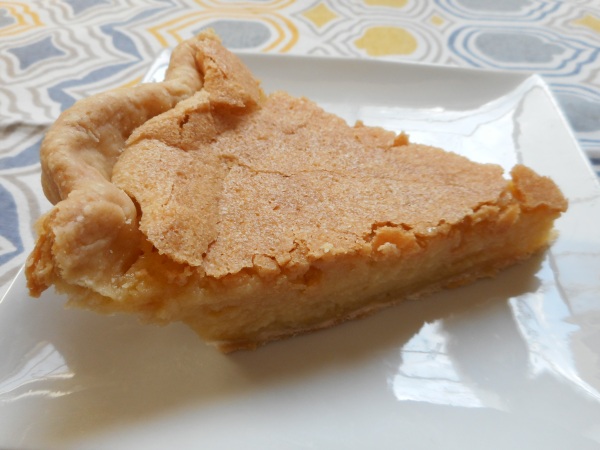 The thing about chess pie is that I don’t understand it.

I hadn’t even heard of it until a couple of years ago. In my defense I’m from San Diego and this pie, apparently, hails from the South.

From what I’ve learned, it’s a sweet custard-y pie–though the stick of butter and ton of sugar put it in a new category entirely. Another element I found unique is the tablespoon of vinegar to cut the sweetness (more on that later) and the cornmeal that’s mixed in with the pie filling, which floats to the top during the baking process to create a crispy top layer. And because the pie’s ingredients are simple, the vanilla really shines through.

But, uh, the sweetness.

It’s a little much. 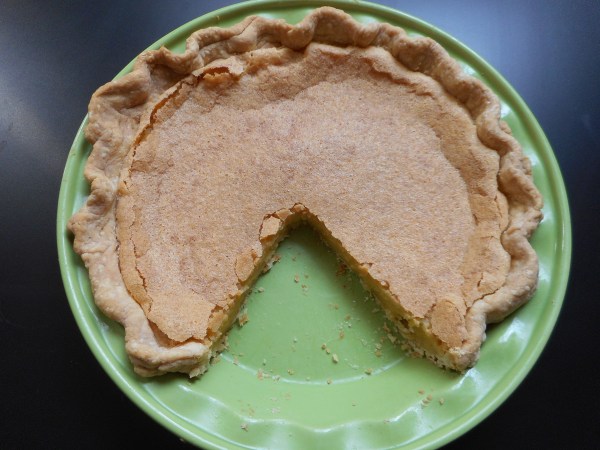 The recipe calls for two cups of sugar. When making this, I cut it down to 1.5 cups. I’d have liked to reduce the sugar more, but I was afraid going any further might mess with the pie’s structure somehow, seeing as the filling is almost entirely eggs, butter, and sugar.

In retrospect I don’t think less sugar would have ruined the pie. And I should have cut down the sugar even more. Like by half. If not more. Because all I tasted in this pie was sugar.

And who decided one tablespoon of vinegar is enough to cut the sweetness of two cups of sugar? (Or even, in my case, 1.5 cups of sugar?) How does that math check out? I was afraid that if I increased the vinegar too much, the pie would taste like salad dressing, so I left the vinegar quantity as is. 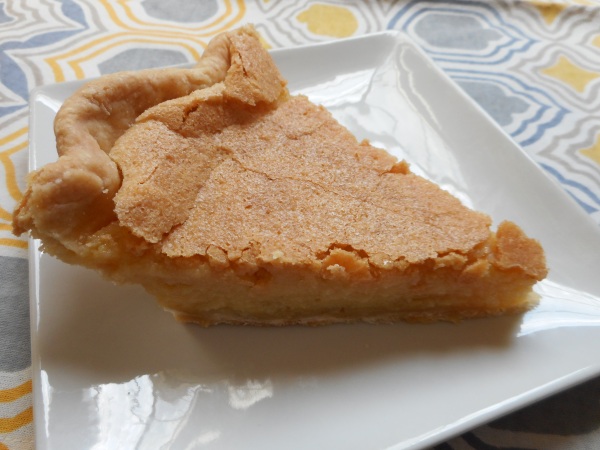 The crispy cornmeal top layer, though? That was pretty cool. I love when things rise to the top during baking. Sometimes baking defies gravity. The crispy layer added a nice bit of texture to the pie, as the filling underneath is more gooey than anything else.

I know variations of the pie exist–variations like lemon chess pie, which I expect might taste a little less sweet. But I made this because I wanted to try something like the traditional version first. Now that I’ve tried it, I can… say that I’ve tried it.

I guess I like pies with a little more going on–fruit, spices, chocolate, custard, cream (though not all at once, I hope). But if you want something sweet, gooey, and vanilla-y, this is the perfect pie. 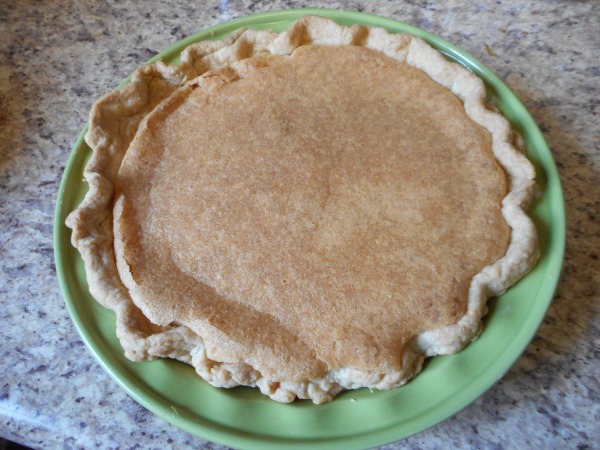 Preheat the oven to 425 degrees. Line the pie crust in the pie plate with a layer of foil and fill it with pie weights (or rice, or dried beans). Bake for 5 minutes at 425, then lower the temperature to 375 and bake for 3 more minutes. Remove the pie weights and the foil liner and bake the pie shell until it is golden brown (about 3-4 minutes longer). Remove the crust from the oven and let it cool completely before adding the filling.

To make the filling, whisk the eggs, milk, and vanilla until combined. Slowly pour in the sugar, whisking as you pour. Add the melted butter, salt, cornmeal, flour, and vinegar and whisk until combined.

Lower the oven temperature to 350 degrees. Pour the filling into the pie shell and bake for 45 minutes, or until the filling is set and jiggles just slightly when jostled (it’s okay if the pie is slightly puffy–it will sink back down to normal as it cools. Some cracking may occur when it sinks, which is also normal). If the edges of the crust start to turn brown before the filling is ready, cover them with foil. Let the pie cool completely before cutting into it.