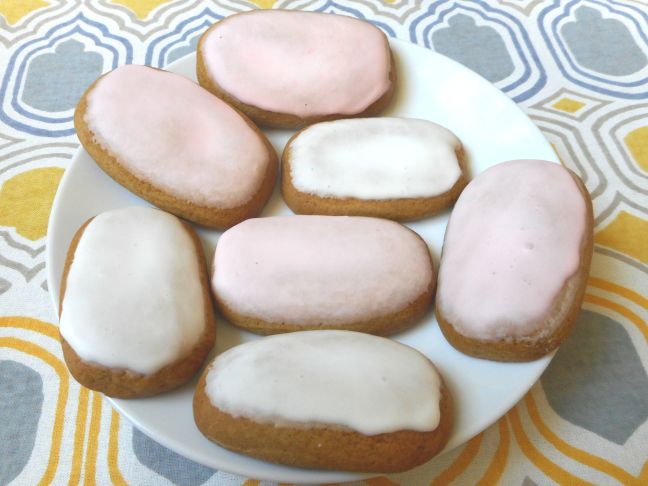 In sixth grade I wrote an essay about these cookies.

Growing up, I spent a lot of time perusing my mother’s Australian Women’s Weekly cookbooks. She kept a stack of them in her walk-in closet, and I would take out a few at a time and flip through the pages, looking for ideas on what to bake next. If I was feeling particularly civilized I would read the cookbooks to my room, or on the living room couch. But sometimes I would just sit on the floor of the closet and read the cookbooks right then and there. Baking waits for no one.

That’s how I learned about honey jumbles. They had a cute name, they looked simple to make, and I loved anything with ginger in it, and that was all the convincing eleven-year-old me needed to try my hand at baking them. 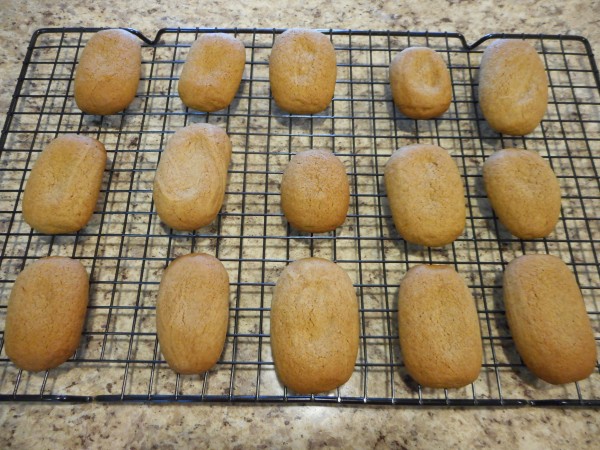 These sweet, spicy cookies are similar in flavor to gingerbread cookies, owing to the ginger and the allspice. But what makes them unique is the honey. Honey is the sole source of sweetness in these cookies, giving them a subtle honey taste as opposed to the brown sugar flavor that gingerbread cookies tend to have. Honey jumbles also have a softer texture than gingerbread cookies–not cakey or chewy, just soft. The lemon icing adds another note of flavor while complementing the ginger flavor wonderfully.

I made these cookies a few times when I was eleven and twelve, but I hadn’t made them since then.

This weekend, it took me three different batches to get these cookies right. Here they are, left to right: batches one, two, and three.

The first time, I forgot to include the baking soda, and so the cookies didn’t spread or… do anything, really. The flavors were there, but the cookies had a doughy taste, they were shaped strangely because I didn’t round the edges properly, and they were darker than they should have been.

My next batch saw a flaw in technique. Wanting to ensure that these cookies spread out, I followed one recipe’s direction to flatten the cookies with a wooden spoon before baking. And, forgetting that the baking soda would do some of the flattening work for me, I flattened them too much. Out of the oven, they were closer to circles than the characteristic oblong shape that honey jumbles are supposed to have. I’d also experimented with the spice levels by–well, by not experimenting with the spice levels. Usually I increase the amounts of spice a recipe calls for, but with this batch I decided to try using the amounts of spice indicated in the recipe. I thought perhaps that might make the honey flavor more pronounced. But no–I was left with just okay, not particularly flavorful cookies. The honey flavor, I learned, was going to be muted no matter the spice levels.

I was determined to get batch #3 right. When I started this honey jumble quest, it was a leisurely Saturday afternoon. But by the time batch #3 rolled around, it was well into Saturday night. My roommate Kate had gone upstairs to sleep and I remained in the kitchen, melting honey and butter on the stove, measuring out the flour and spices, and not referencing a recipe anymore because I had the recipe memorized by then.

And these ones came out right. I doubled the spices as I usually do, I didn’t forget the baking soda, and I took care to shape the edges without flattening the cookies. Checking on the cookies in the oven, I worried I had made a mistake by not flattening them at all, as the cookies looked suspiciously tall. But they were still in their formative years, so I grabbed a spoon, reached into the oven, and gently pressed down on each cookie. Don’t aim too high, cookies. Let’s crush those dreams. It was risky but it paid off–the cookies were the perfect height. Only a couple of them bore slight spoon dents from the trauma.

The most important part of the shaping is getting the rounded edges. It’s not enough to half-heartedly pinch the edges together–take care to smooth them over so that there are no corners in sight. We want round little Tootsie rolls, as shown in the far-right square of the image below. The other two squares show my shaping efforts from batches one and two.

And while I don’t recommend flattening them to the extent that I did in batch #2, it would be a good idea to very slightly press down on them with a spoon (or your finger) before you put them into the oven. They should still be tall–about 1.5 centimeters tall–but a very slight flattening will help them get that perfect shape.

Here they are: honey jumbles, my favorite dessert of adolescence, the source of an essay and now a blog post. Here’s to hoping it takes you less than three tries to get these right. It took eleven-year-old me just one try, which makes me feel inferior to my past self, and stupider somehow. But eleven-year-old me thought Alaska was an island, so. What does she know? 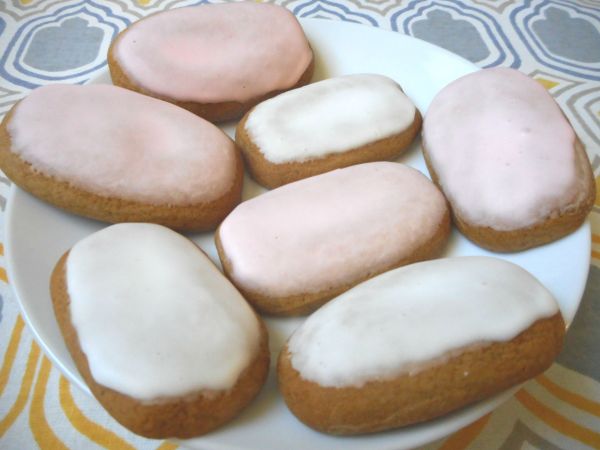 Heat the honey and the butter together in a small saucepan over low heat until the butter melts (about five minutes). Once the butter melts, take the saucepan off the heat and let the mixture cool for five minutes. While the mixture cools, combine the flour, baking soda, ginger, allspice, and salt in a medium bowl. Make a well in the center of the bowl and add the honey mixture along with the milk. Stir to combine until a sticky dough forms. Cover with plastic wrap and refrigerate for 30 minutes.

Preheat the oven to 350 degrees F. After chilling for 30 minutes, the dough should be less sticky to work with. Put the dough onto a floured surface and knead it into a ball, adding more flour if needed. Cut the dough in two and roll each half out into a long rope, no wider than an inch thick. Use a knife to divide the dough ropes into 2.5-inch-long widths.

Use your fingers to shape the edges of the cookies so that they are rounded, and use a spoon to very gently press on each cookie–the goal is not to flatten it but to make it only slightly (a millimeter or so) shorter.

Bake the cookies for 10-15 minutes or until they are firm and the bottoms are light brown. Let cool for five minutes before transferring the cookies to a cooling rack. When they are cool, frost them with the lemon icing (recipe below).

Makes way more than you need. But what are you gonna do, use half an egg white?

Beat the egg white until it is thick and frothy (think pre-soft peaks). Whisk in a cup of the powdered sugar, the salt, and the lemon juice. Add the remaining half-cup of powdered sugar.

Pour half of the icing into another bowl and use the food coloring to tint that half light pink. Ice half the honey jumbles with the white icing and the other half with the pink icing.

One thought on “Honey Jumbles”