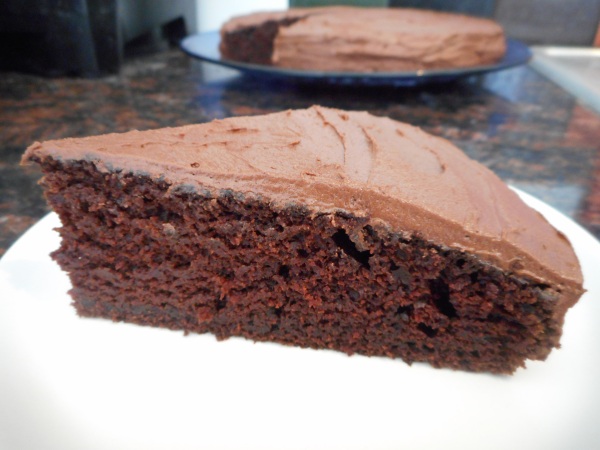 This is my go-to chocolate cake recipe.

I was drawn to it from the moment I saw the pictures on Foodess, the recipe source. I remember being so stricken by the pictures because the cake appeared so deeply dark, moist, and chocolatey that it looked black. That’s my kind of cake.

The darkness doesn’t quite come across in my pictures. To be fair there was no recipe for the frosting, so mine was largely improvised; however, this was day one and I swear the frosting got darker as the days progressed. Much like my outlook on life. 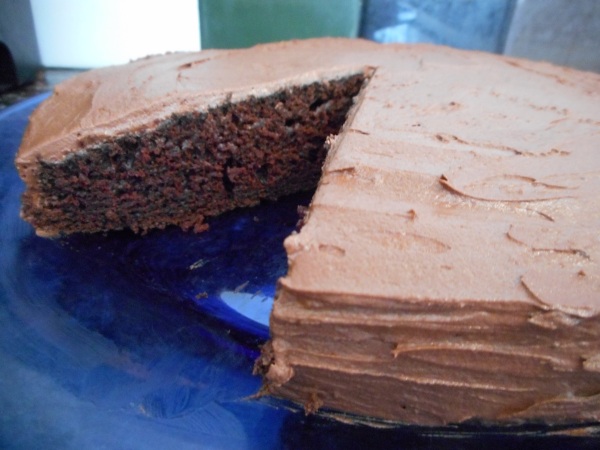 Darkness or not, though, this cake is still deliciously chocolatey. The moistness is evident from the way it’s hard to see individual crumbs in a slice, but that doesn’t mean the cake is dense or gummy. Rather, it somehow remains springy.

This cake has a dash of coffee in it to bring out the chocolate flavor. The recipe states that you can use water in lieu of coffee if you wish, but I’d strongly recommend using the coffee. You can’t taste it, but it really brings a depth to the cake’s overall flavor and makes it more chocolatey somehow. I couldn’t use the coffee when I made the cake this time–a little moisture had gotten into my instant coffee since I last baked with it, turning it into a solid, slightly moldy block–and the difference was noticeable. The cake was still chocolatey but even with vanilla the flavor was lacking, somehow; a little one note. Don’t let your cake have just one note. No one wants to listen to that song. 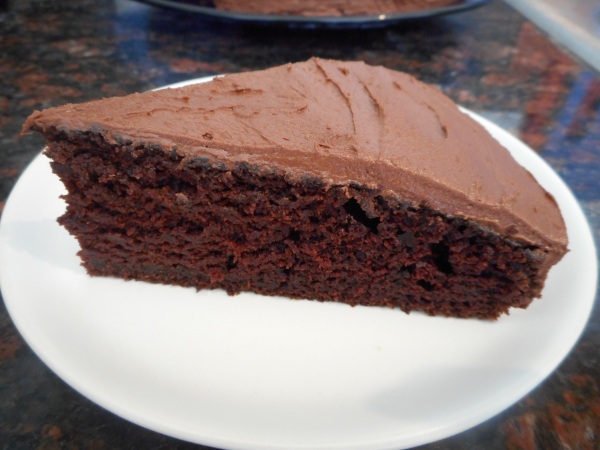 I made this cake a couple of months ago but didn’t get around to posting it until now. I made the mistake of not writing down my improvised frosting recipe, and enough time passed that I forgot it (which I seem to have a habit of doing). So last night I finally set out to replicate it, which I did easily enough. I wrote it down and everything.

I like this frosting because it’s light and fluffy with a solid chocolate flavor. But I still wanted to make something similar to the dark frosting from the Foodess picture. I asked myself the eternal question: How much is too much cocoa powder? So I made yet another version, this time with more cocoa powder. Like, three times the amount of cocoa powder.

It sounds excessive, but it worked. The result is a dark, fudgy frosting that I plan to use going forward. I made just a small batch for experimental purposes; my apologies for how unphotogenic the frosting is (I can’t help that it’s the same color as… well… other things). But here’s a comparison. On the left is the original fluffy chocolate frosting used on the cake as pictured. On the right is the fudgy frosting. Both are good; it’s all about how chocolatey you want to go. 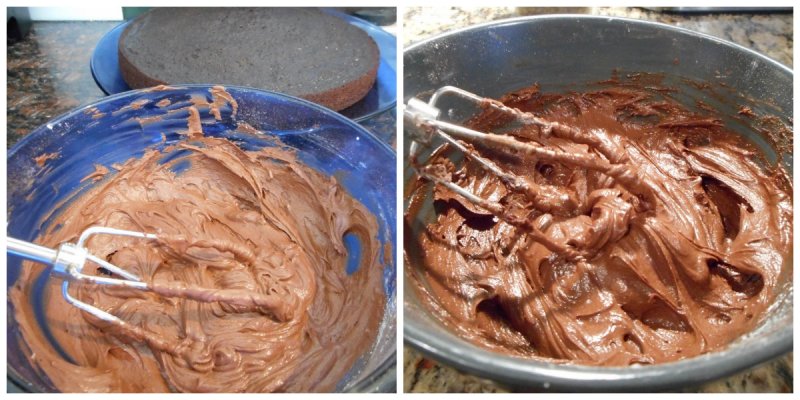 I’ve provided the recipes for both versions below, but feel free to go in a different direction if you have other ideas. Alternative frostings I’ve used on this cake have been:

Sometimes, though, you can’t beat the classic chocolate on chocolate.

Note: I halved the recipe when I made this (a double-layer cake is beautiful but it’s not practical for a two-person household). Below I’ve put the recipe for the full two-layer cake. 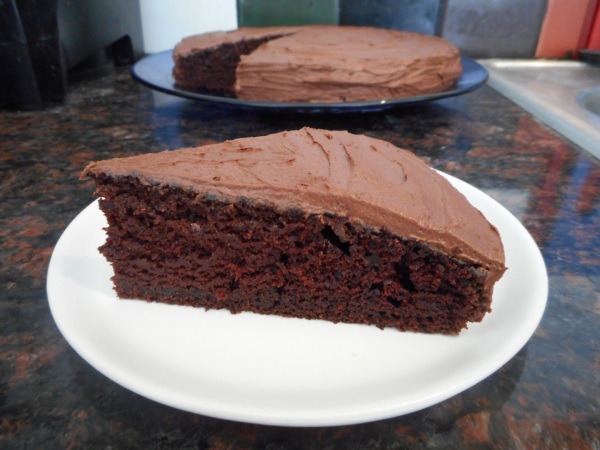 Preheat the oven to 350 degrees. Grease two 9-inch baking pans and set aside.

Combine the flour, sugar, cocoa powder, baking soda, and salt. Stir in the buttermilk and melted butter, then slowly beat in the eggs until smooth. Stir in the hot coffee (fear not if the batter is liquidy).

Pour the batter evenly between both pans and bake for about 25-35 minutes, or until a toothpick inserted in the middle of the cake comes out mostly clean with a few crumbs attached (since the goal is moist!). All ovens are different, so start checking at the 20-25 minute mark and adjust your timer from there.

Let the cakes cool in their pans for about 15 minutes, and then gently run a butter knife along the edges of the cakes. Flip the cakes over onto wire cooling racks. Once they’re out of the pans, flip the cakes back over onto the racks so that they are right-side up. Cool cakes completely before icing them with the frosting of your choice. I recommend one of the two options below.

Makes enough for one double-layer cake

Cream together the butter, powdered sugar, and salt. Add in the cocoa powder, vanilla, and milk; beat until the frosting reaches a fluffy consistency.

Makes enough for one double-layer cake

Cream together the butter, powdered sugar, and salt. Add in the cocoa powder, vanilla, and milk; beat until the frosting reaches a fluffy consistency.

One thought on “Moist Chocolate Cake”