Strawberry and (Half) Coconut Milk Pops

It may be September, but it’s still summer. My birthday falls on the first day of fall (puns), and knowing this I’m always a little sad when people disregard the summer in September. Pumpkin spice lattes may be all around us, but fall doesn’t begin until three weeks into September, and I prefer to give summer the respect it deserves. (Which, honestly, isn’t much, as summer is my least favorite season–all the more reason for me to wait until it really ends before I celebrate its demise.)

Enter this summery ice pop. Fruity and coconutty with a splash of vanilla, this popsicle is perfect for a warm summer day and can be easily adjusted depending on your coconut milk preferences. I like coconut milk, but I don’t like when it takes the place of all dairy in a dairy-based recipe. In times when I’m desperate for ice cream but find myself without cream, I’ve followed ice cream recipes that use coconut milk as the sole source of dairy, and I can never get past the extreme coconut-milky taste that permeates the entire dessert. Coconut milk is a wonderful thing, but I suppose I prefer its presence to be a bit more subtle.

The original intention with these was to make plain coconut milk popsicles with my friend who had never had coconut milk before. I wanted her to experience the glory, and she was intrigued by the concept of popsicles made with coconut milk. Inspired by this recipe for strawberry coconut milk popsicles, we decided we’d incorporate strawberries for added flavor and fruitiness. But we got as far as opening the can and smelling the delicious but strong coconutty scent before deciding we’d rather cut the coconut milk with something. We ended up using equal amounts milk and coconut milk to achieve a more subtle coconutty flavor.

It wasn’t quite subtle enough for us.

I’m sure it’s just us, though. Based on other recipes I’ve seen, coconut-milk based popsicles are in fact a thing–a thing that people enjoy, no less, along with coconut milk ice creams and coconut whipped cream and everything else that can be done with it. So, even though I didn’t love the coconut flavor in these, I thought I’d present them to the world anyway. Aside from what I found to be an overpowering coconut milk taste, they were quite delicious. Fruity and slightly tart from the strawberries, a nice vanilla flavor throughout, and creamy from the coconut milk, these popsicles had a slight strawberry cheesecake flavor. And in a world of recipes where it seemed to be all-or-nothing with the coconut milk, I wanted to offer this half-and-half mish-mash to people who might prefer something more in-between.

When I make these again, I’ll dial back the milk to coconut milk ratio to 2:1 rather than 1:1. If you like desserts in which coconut milk takes center stage, feel free to use the 1:1 ratio for something a bit more pronounced, or replace all dairy with coconut milk if that’s your thing. It’s just time for me to admit that, like summer, it’s not mine. 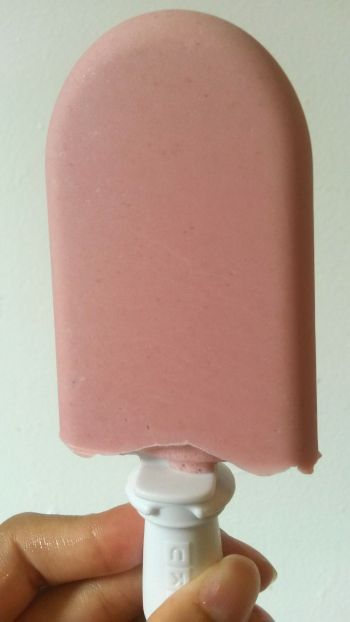 Strawberry and (Half) Coconut Milk Pops

Makes 12-16 popsicles, depending on mold sizes

Blend all the ingredients together in a blender. Pour the mixture into popsicle molds and freeze for 4-5 hours or until completely frozen. Run molds over hot water to loosen and pop the popsicles free.