I was fifteen when my best friend, Kate, told me about this ice cream. She was telling me about having dinner at her then-boyfriend’s house the night before. She glossed over the evening itself and skipped straight to the dessert, which, really, is the most important part of any story. The dessert, she said, was strawberry cheesecake ice cream, with chunks of cheesecake in it. This was a new concept to me and I knew I needed this ice cream in my life immediately. That’s when she told me it was Safeway brand, so the Vons down the street would have it.

Because my parents weren’t home, my only option was my older brother. I knocked on his door, poked my head in, and asked if he would drive me to Vons for strawberry cheesecake ice cream. I gave an attempt at a winning smile.

It did not work.

I dwelled on the ice cream for a few minutes before deciding I had no choice but to walk the mile to Vons myself. So I set off on the journey to Vons, breaking into a run halfway there because cheesecake chunks. In ice cream.

Once I got there and made the purchase, I ran/walked the entire way home with a crinkling plastic bag of ice cream gripped tightly in my hand. And then I found myself breathless in the kitchen, staring at the holy container of ice cream on the counter. 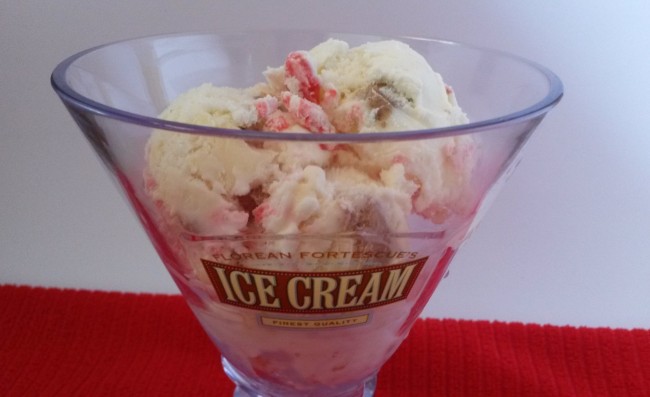 Two minutes later, spoon in hand, I sat down to a bowl of soft, melty ice cream with swirls of strawberry and chunks of cheesecake studded throughout. It was sweet and creamy, with a perfect tartness from the strawberry swirl. And the cheesecake chunks were everything I could have imagined. It was like two desserts in one.

Last week, in an attempt to create the perfect recipe, I made three different batches in four days. And then I made another batch a few days later. There are three components to this ice cream and I wanted to get each one right.

First up, the cheesecake ice cream base: Normally improvising ice cream recipes works out for me because I know how I like my ratios: equal parts milk and cream, a quarter cup of sugar per cup of liquid, and flavorings to taste. But the cream cheese threw me off with this one. The first batch seemed to have too much cream and left my lips feeling greasy. In the next couple of batches, I overcorrected the problem with too much milk or cream cheese, resulting in ice cream that was either too hard or too cream cheese-y (which may not seem like a thing, but I wanted just a subtle cream cheese flavor so the chunks could take center stage). So I went back to the first batch, keeping all the ratios the same except for the small change of slightly more milk. And, at last, it worked.

(Side note: In doing this, I had a real-world application for pre-algebra! When are you going to need to calculate ratios and solve for X, 7th grade Shauna? When you’re trying to make ice cream. Just let the math into your life.)

The chunks: Where the cheesecake came from made a difference. I did one batch using those pre-made cheesecake chunks from Yogurtland and the chunk experience wasn’t as good–I liked the flavor that came from an actual slice of cheesecake, and the way that some bits were particularly crusty. There’s also an added appeal to the way no one piece was the same size. I got my slice from a grocery store, but you’re welcome to make your own if you’re feeling particularly adventurous. (Personally, that’s where I draw the line. I’m already making my own ice cream; isn’t that enough?)

Lastly, the strawberry swirl: I found that it was better to reduce the pureed strawberries over the stove for ten minutes or so–not reducing gave the swirl an icy texture.

And a note before we begin–I don’t use egg yolks in my ice cream. I’m of the (apparently unpopular) opinion that egg yolks make the ice cream too rich and muddle its flavor. So if you’re looking for a yolky ice cream base, look elsewhere.

To start, chop about 8 strawberries (a cup or so) and let them sit with some sugar and lemon juice for about twenty minutes, or until they get all juicy.

Put the mixture in a blender or food processor and blend until liquified. Pour it into a saucepan and let simmer over low heat for 10-15 minutes, stirring occasionally. Once it’s reduced a bit, take it off the heat and let it cool in the fridge.

Now cream together your cream cheese and sugar. Ideally the cream cheese has been sitting out for an hour or so to let it soften, but if you’re me and don’t plan ahead, that’s okay, too. We can always get fire involved (not recommended. But hey, it worked). 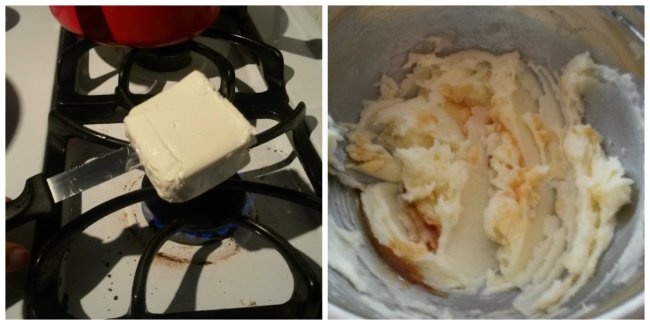 Once it’s creamed together, add the vanilla. Then whisk in about 1/4 cup of the milk–we’ve got to add it gradually or parts of the cream cheese will go off into lumpy factions and it will be anarchy. Whisk in another 1/4 cup of milk, and then slowly add the rest of the milk. Then stir in the cream, pour the mixture into your ice cream maker, and let it churn.

While it churns, let’s make the magic happen.

You’ll need to acquire a single serving slice (or two) of cheesecake from a grocery store. This duo of skinny slices resulted in a heaping cup–perhaps 1.5 cups–of chunks, which worked out perfectly for this recipe. Freeze the slice(s) for an hour or two, and then get to hacking. 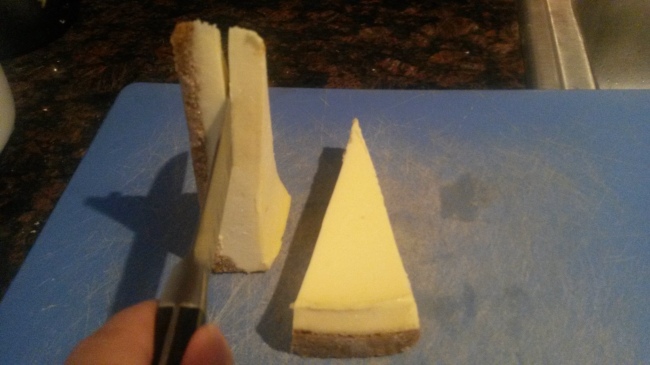 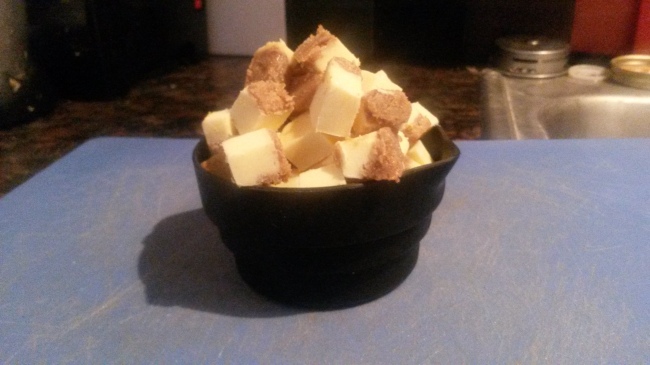 Put them back in the freezer until the ice cream is finished churning. You’ll know it’s ready when it looks pornographic.

Now use a spatula to fold in your chunks. I did it right in the ice cream bowl because I’m lazy, but feel free to transfer the ice cream into a mixing bowl and fold the chunks in from there.

Once it’s incorporated, put some of the ice cream into your storage container and add a generous spoonful of the strawberry sauce on top. Using a skewer or knife, swirl the sauce into the ice cream. (This was running through my head the entire time I swirled.)

Once swirled, put more ice cream on top, add a spoonful of strawberry sauce on top of that, swirl again. Repeat until all the ice cream has been added.

Just trust that I filled the container with ice cream and strawberry swirl. The picture I took kind of looks like someone menstruated all over the ice cream (come to think of it, so does the above picture), so let’s just move past it and put that mess away. Freeze it for 2+ hours to let harden.

I got this container from Sur la Table and I adore it.

Here’s what it looks like after a night in the freezer (and after I already dove into it. I think I’ve already demonstrated quite clearly that I have no patience when it comes to this ice cream). I could have swirled a bit more here, but–more importantly–do you see all the chunks?! 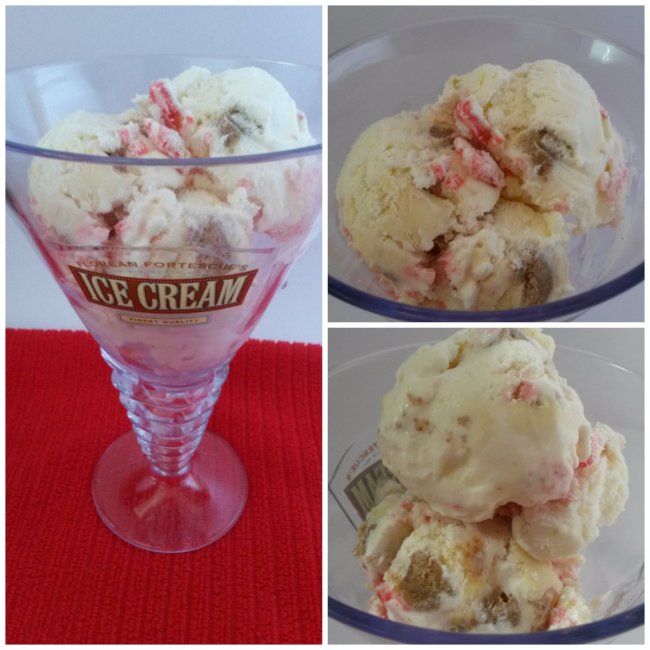 Chop the strawberries and cover them with the sugar and lemon juice; let sit for 20 minutes. Puree the mixture and pour into a small saucepan. Let simmer on low heat for 10-15 minutes or until somewhat thickened. Let cool.

Cream together the cream cheese, sugar, and salt. Add the vanilla. Then whisk in 1/4 cup of the milk, ensuring that no lumps form. Whisk in another 1/4 cup of milk; when combined, add the rest of the milk. Stir in the cream. Pour the mixture into an ice cream maker and let it churn.

Transfer some of the ice cream into your ice cream container and spoon a tablespoon or two of strawberry sauce on top. Use a skewer or knife to swirl the sauce into the ice cream. Repeat the process with more ice cream, sauce, and swirling. Depending on your strawberry preferences, you may have some sauce left over. For best results, let the ice cream set in the freezer for at least two hours before serving (but “best” is relative. I won’t judge).